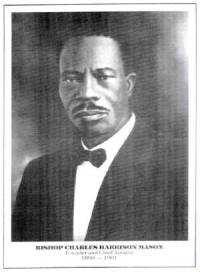 Bishop Charles Harrison Mason organized and for many decades led the largest black Pentecostal denomination in the United States, the Church of God in Christ (COGIC), now based in Memphis, Tennessee. Born to parents who had been slaves, Mason grew up intending to be a minister. “It seemed that God endowed him with supernatural characteristics,” his daughter wrote, “which were manifested in dreams and visions that followed him through life.” Mason’s parents moved to Plumersville, Arkansas, in 1878, where Mason was saved and called to preach. Mason forsook his mission until he was stricken with tuberculosis. He saw his healing as a miraculous reprieve and divine message to pursue his spiritual duty. Mason attended Arkansas Baptist College briefly in the early 1890s but left school after a few months, declaring that God showed him “there was no salvation in schools and colleges.” Mason received his preaching license in 1893 from a Baptist congregation. Four years later Mississippi Baptists ordered him to vacate his pulpit for the offense of preaching holiness doctrines, especially the doctrine known as “sanctification.” Seeking to find a place for his own church, he received permission to use an abandoned gin house for a revival in 1897; this was the origins of what became the Church of God in Christ.

In the early 1900s Mason walked from town to town in the Mississippi Delta, spreading the holiness teachings. Yet he was not satisfied with the second blessing of sanctification. Like other early Pentecostals, he sought a yet more profound spiritual experience. He found it at the Azusa street revival in Los Angeles, where he received the final Holy Spirit baptism and spoke in tongues. During a night of prayer, Mason saw a vision. “When I opened my mouth to say glory,” he later remembered, “a flame touched my tongue which ran down in me. My language changed and no word could I speak in my own tongue.” After Mason’s return from Los Angeles, he split with his holiness compatriots. Legal tussles ensued, resulting in Mason’s establishing the Church of God in Christ (COGIC, now a Pentecostal organization) in Memphis. Early Pentecostals recognized Mason’s special powers of discernment; they saw him as supernaturally gifted. Criticized for importing conjure into the churches, the COGIC founder pointed to the scriptures indicating that Jesus taught the same kinds of healings and spirit possessions that Mason himself also preached. Mason’s preaching skill garnered considerable attention. As he proudly recounted his early career, the Holy Spirit through him “saved, sanctified and baptized thousands of souls of all colors and races.”

Over the next two decades, Mason traveled and preached tirelessly throughout the entire Mississippi Delta region. With the migration of African Americans to the North, COGIC increasingly established a presence in Chicago, Detroit, and other cities as well. Mason’s church, originating from his early preaching work in Mississippi, became well known for its spirited singing, accompanied by tambourines, trumpets, and instruments of all sorts, and by the kinds of “shouts” and emotional ecstatic release that had been driven out of many of the more respectable black Baptist and Methodist churches. Mason reigned over the Church of God in Christ until his death in 1961.

Oops! This site has expired.

If you are the site owner, please renew your premium subscription or contact support.