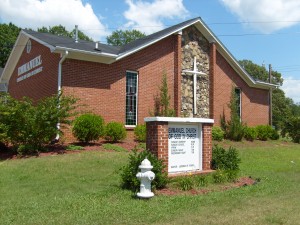 Therefore the Lord himself shall give you a sign; Behold, a virgin shall conceive, and bear a son, and shall call his name Emmanuel.

It was a small white building approximately 25′ by 40′ feet. Elder Shannon faithfully served this church for 33 1/2 years. About the 26th year of pasturage, Elder Shannon built a larger church at 1208 North Green St. This building measured 40′ by 60′ feet. This was a vast improvement, not only moving into a larger building, but a better location. With the move, he renamed the church Emmanuel (meaning God with Us).

Seven years later, Elder Shannon was appointed superintendent of the #1 district, forcing him to resign his pastoral position at Emmanuel because of the great distance and the attention he must now give his new position.

Elder William Pratt was appointed as his replacement. Elder Pratt, being a full time pastor of two churches, was faithful to Wednesday night and Sunday services. Even though the distance was far, he pastured Emmanuel for 11 years. Desiring to semi-retire, Elder Pratt decided to resign from Emmanuel and pastor the church in his hometown.

Seventeen years ago Bishop Scott appointed our present pastor, Elder Jeremiah Penro. He has proven to be faithful and worthy of the appointment. Like Moses, God has allowed him to grow up around us while preparing him to lead us to higher heights. With help from his lovely wife, he has lead Emmanuel to great spiritual levels. He has built the largest church edifice in our church’s history, doing much of the work with his own hands. His gift has made room for him and brought him before honorable men.

He has advanced from ordained Elder to Pastor, from Pastor to District 10 Evangelist, from District 10 Evangelist to President of the State Evangelist Board. He now stands ready for whatever work God has for him, saying, “Where He leads me, I will follow.” And when he follows, he will lead Emmanuel Church of God in Christ there also.

Oops! This site has expired.

If you are the site owner, please renew your premium subscription or contact support.